The reunion of Hartford with the majestic Connecticut River is a key component of the downtown Hartford development strategy. Just as the Adriaen’s Landing development was built to generate activity near the river, funds were committed to the ongoing effort by the Riverfront Recapture organization to create pedestrian links directly to this valuable natural resource.

A portion of the state’s $25 million riverfront fund (originally administered through CRDA’s predecessor, CCEDA) was applied to Riverfront Recapture’s construction of a pedestrian walkway connecting Constitution and Phoenix Plaza to Riverfront Plaza and Riverwalk-Downtown, which offers stunning views and passage to, along and across the river.

These projects have been advantageous in advancing the respective efforts of CRDA and Riverfront Recapture to provide additional access points to the Connecticut River and complement the revitalization efforts relative to the Colt Manufacturing property and in the Sheldon/Charter Oak neighborhood. State funds also support the connection of Riverfront Plaza south to Charter Oak Landing and north to Riverside Park, as well as the Colt Neighborhood Gateway project, providing access to the river from Van Dyke Avenue.

CRDA is utilizing $2.34 million of the funds granted to it by the General Assembly for projects in East Hartford for riverfront and neighborhood improvements throughout the Town.
Improvements to the Great River Park will be done in conjunction with Riverfront Recapture and will include repairs and improved access to and within the park, particularly for disabled visitors:
• Improved ADA access to boat launch and fishing pier
• New LED lighting and signage in and around the park
• Demolition of old structures
• Refurbishment of Bulkeley Bridge overlook
• Refurbishment of Founders Bridge stairs and ramps 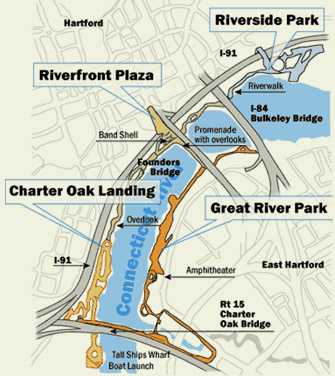